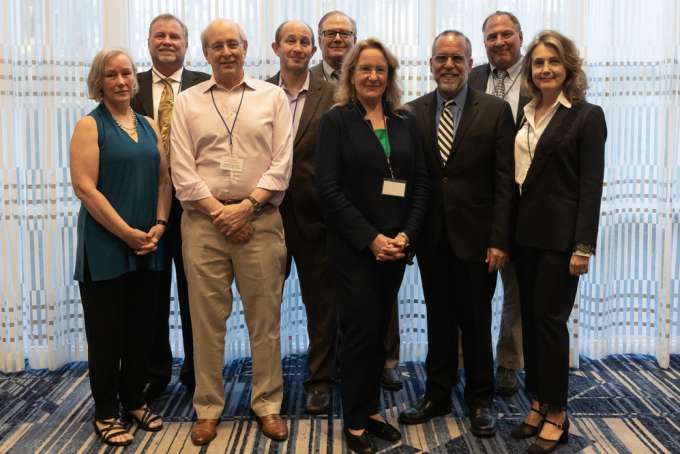 Expert neuroscientists who study age-related memory loss at all four McKnight Brain Institutes in the U.S. — at the University of Alabama at Birmingham, University of Arizona, University of Florida and University of Miami — came together in Gainesville April 10-12 to present the latest scientific data and to collaborate on prospective interventions to promote healthy and successful cognitive aging.

Highlights of the 11th Inter-institutional Meeting hosted by the McKnight Brain Research Foundation, or MBRF, included the meeting’s standing-room-only keynote address, during which Tony Wyss-Coray, Ph.D., a professor of neurology and neurological sciences at Stanford University, discussed research examining the composition of blood in aging and implications of these vast changes.

Todd Golde, M.D., Ph.D., director of the Evelyn F. and William L. McKnight Brain Institute of the University of Florida, welcomed more than 100 investigators and the MBRF Board of Trustees at the start of Thursday morning’s scientific sessions. He noted that UF’s MBI just celebrated its 20th anniversary — a significant milestone tied to the McKnights’ gift and their generosity.

Twenty years ago, Golde said, brain aging wasn’t in the national dialogue to the degree it is today. Brain aging refers to the normal decline in thinking, problem-solving and memory skills that’s typical with aging and is in contrast to pathological variants such as Alzheimer’s disease and other forms of dementia.

But largely to the credit of J. Lee Dockery, M.D., chair of the MBRF Board of Trustees, the foundation became the leading advocate for drawing attention to cognitive aging. “The McKnight Brain Research Foundation coalescing research around this notion of preventing and trying to alter cognitive decline during aging has really made a mark on the national landscape,” Golde said.

My challenge to all of you…is to think of how we collectively can help to change that future, where we alter our understanding of age-related cognitive decline, Alzheimer’s disease or other neurodegenerative diseases into one where these are preventable, treatable or curable.

J. Lee Dockery, M.D., chair of the MBRF Board of Trustees

The conference kicked off with a dinner April 10 at the Hilton University of Florida Conference Center at which Dockery announced he would be retiring as chair of the MBRF, and that his son and fellow trustee Michael L. Dockery, M.D., has been elected to assume his position. Richard Isaacson, M.D., assistant dean for faculty development and director of the Alzheimer’s Prevention Clinic at the Weill Cornell Medical College, will serve a second term on the board. Among attendees of the UF-hosted conference were David Norton, Ph.D., UF vice president for research, and Stephen P. Sugrue, Ph.D., senior associate dean for research affairs at the UF College of Medicine and acting associate vice president for research at UF Health.

In his comments Thursday, Dockery credited the vision of the late McKnights that cognitive aging was important to study. Over the 20 years since the MBRF was founded, Dockery said, the foundation has hosted three cognitive aging summits and established four institutes.

We’re the only organization that tries to differentiate cognitive aging and age-related decline as opposed to other neurodegenerative diseases, whereas other diseases have advocates and have funding targeted to support those programs. So as we move forward, how can we make a difference? We have to co-opt the talent that is doing research that can bring knowledge and understanding, that can influence health policy, that can influence the public.

J. Lee Dockery, M.D., chair of the MBRF Board of Trustees

He noted that professional education and training is limited in the field. “If we went to a physician’s office today and said, ‘You know, I think I’m losing it,’ there would not be uniform agreement on which test to evaluate you,” Dockery said. “You all are the soldiers in the army to advance the understanding of cognitive aging and age-related decline in its own domain and its importance in the health and welfare of the public.”

In the scientific sessions, investigators presented updates on the multisite McKnight Brain Aging Registry, an ongoing study aimed at including 200 participants age 85 and older and designed to gain understanding about changes in brain structure and function in aging.

We’ll have one of the largest cohorts available with neuroimaging data, behavioral data as well as laboratory data

The registry, said Gene E. Alexander, Ph.D., director of the Brain Imaging, Behavior & Aging Lab at the University of Arizona, is a great example of the collaborative work across the institutes to understand why cognitively unimpaired older adults are successful agers.

“If we can understand why these individuals by definition are really successful agers reaching ages in their 90s and at the same time cognitively unimpaired, we can translate that information, that valuable data, for everyone else to take advantage of and to really learn from,” he said, noting that investigators are examining factors including physical activity and quality of sleep.

Among many lines of study, investigators also presented an update on the UF-led multisite ACT Study, or Augmenting Clinical Training in Older Adults, a large Phase III clinical trial that combines transcranial direct current stimulation, or tDCS, with “cognitive-training” computer tasks. TDCS is a noninvasive therapy that involves passing a weak and safe electrical current through electrodes affixed to the scalp.

The conference additionally included a dinner reception at the Cade Museum for Creativity & Invention and a session on how to effectively communicate research findings to the public, featuring Isaacson; Barnes; Jennifer Bizon, Ph.D., co-chair of the UF-MBI Education and Outreach Committee; Lynne Anderson, senior health and medical editor at The Conversation, a nonprofit that publishes essays written by academics for the lay audience and draws worldwide readership; and Michelle Jaffee, science writer at UF’s McKnight Brain Institute.